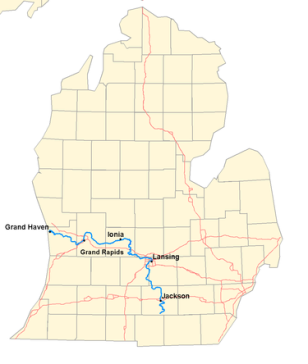 The Steel Crusaders, are a large, heavily-armed group of Bikers, the primary “military” force of Southern Michigan. They might be encountered anywhere in Michigan, but are most likely to be found near the Grand River. The SC roam – at will – along the river valley; they prey upon the communities that exist between the ruins of Jackson and the ruins of Grand Haven.  The majority of the Crusaders are in their late teens or early 20’s.  Most of them are simply swaggering thugs – lording it over people who are too frightened or too weak to fight back.

The Steel Crusaders used to run a simple protection racket: pay taxes, or die.  Taxes took the form of food, drugs, fuel, salvage, manufactured goods, and (sometimes) slaves.   It was unpleasant, but the farmers and townspeople could survive – and at least the Bikers protected the roads.  They killed bandits and oversaw maintenance/repair of “The Avenue” (Grand River Avenue, aka US Route 16).  In other words,  the Steel Crusaders did have a useful purpose and weren’t stupid or too greedy.  A sort of understanding was possible.

However, 5 years ago, a new gang-leader took control and things became nastier.   Slaves are now the most commonly demanded type of taxes and the Bikers have become savage.  They kill or torment people that pose no threat to them.

When the current leader (Jace Hansen) seized power, he was secretly backed by the Breeders.  The Breeders covertly poisoned many of the older (and smarter) Bikers and then made several types of drugs available to the rank-and-file.   As a result, the Crusaders are now addicts; they have lost any trace of self-discipline.  They are simply swaggering thugs – lording it over people who are too frightened or too weak to fight back.  Ironically, the Bikers think that they are the apex predators.  None of them realise that their boss takes orders from the Breeders.

SO why have the Breeders done this?