“Only racially superior peoples are creators and bearers of a high culture. Only they determine the course of events. Inferior races have no history. They lack the necessary ability, the ability to master their own fate. Only racially advanced peoples have this ability. Races that do not have the courage to make history have no history. The life of a people does not develop mechanically, nor does it develop steadily. It is a constant struggle with nature and the environment, and above all with other peoples. It is an eternal battle, an eternal struggle. There is no unified, gradual development of all peoples to a common goal.” 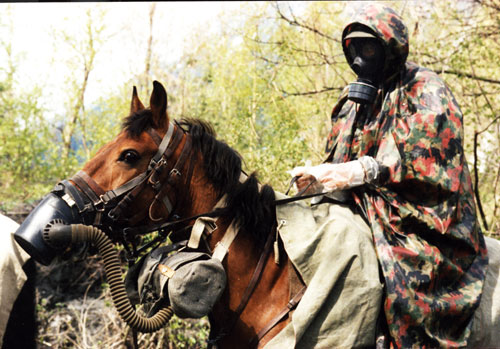 In TM1-1, the Breeders are described as

These people hunt throughout the country for pure, unmutated, uncontaminated human stock. They are descended from a group of genetic scientists who survived the War. They believe there will be a super-race to emerge from “the Chaos” as they refer to the War.

The name “Breeders” is a slang term used by outsiders.  The members of this group prefer to call themselves the “American Renaissance Movement” or ARM  and they believe that  their version of eugenics is the only path to “rebuilding the living foundations of America”.    Incidentally, the “super-race” mentioned by the ARM doctrine was originally unspecified, but (after extensive internal disputes) is now described as possessing “genetic purity”, ruthless warrior pride and artistic brilliance.

The Breeders see themselves as above “herd morality”.   They see themselves as noble and even spiritual.  They believe that they have a duty to conquer and to guide the mass of humanity towards becoming the New Race.  However, they are not humorless or puritanical; they admire creativity and particularly approve of music and dance.

Interactions with other groups

Usually very bad.  The Amerindian Empire particularly dislikes the Breeders and (rightly) suspects that they kidnap children who appear to fit their genetic ideal, or have “breeding potential” .

Atlantis Project planners believed that it would be useful to have weaponry that was easily-concealed and “non-military”.

The knife is made of stainless steel and has an all-black anodized coating.

It is often acknowledged that the appearance of the Morrow Project personnel may be intimidating and/or distinctive.  This can be unhelpful if the team wants to be discreet.

A couple of solutions have been developed

In the canon (3rd edition) game, the Contact Pack was introduced via ‘Operation Lucifer’.   In essence, this is a disguise: a way to contact survivors without looking like a group of uniformed and heavily-armed paramilitary troops.  It is intended to be used by one member of the Team.

Similarly, a common (but unofficial)  addition to the game is a “BOB”  or bug-out bag which is intended as an Escape & Evasion emergency kit and includes weapons, communications and survival gear.  This is intended for use by all team members.  An example is shown here

The Atlantis Project planners liked both of these concepts, but they preferred to simplify the logistics (to save money).  Therefore, they developed the Low-Key Pack.  This can be used for Disguise, Escape/Evasion, or even as a “day pack” for regular operations.